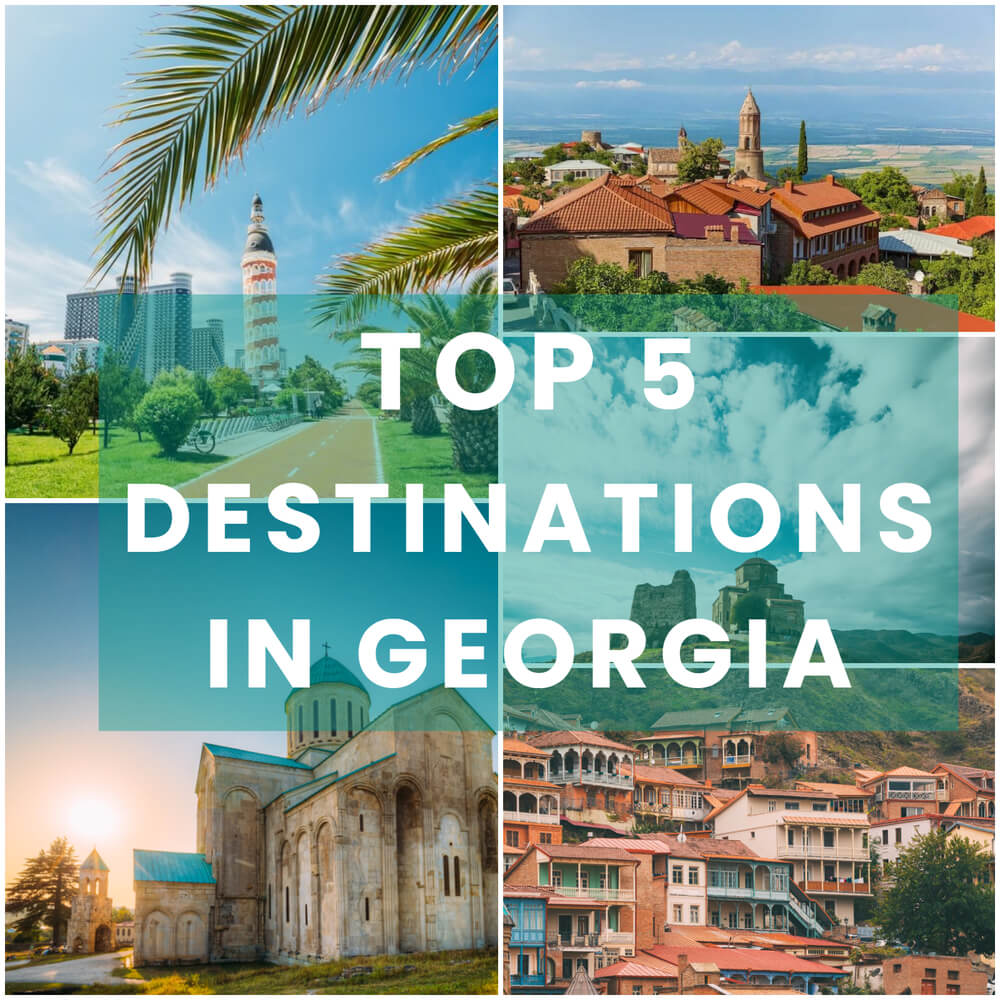 Top 5 Must Visit-cities in Georgia / Historic cities of Georgia

Journey to Georgia for most tourist’s starts from Tbilisi. And this is not surprising – Tbilisi is synonymous with the Georgian identity!

Tbilisi has been the capital of Georgia since the VI century!

Traces of 15th century can be found in every corner – in the names of the monuments and districts of Old Tbilisi, the diversity of ethnic groups and centuries-old urban customs, the European style of buildings, city of character, aesthetics and distinctive morals …

Old Tbilisi has been nominated for membership in the UNESCO World Heritage List.

Many city-dwellers may not even know the details of Tbilisi’s rich history.

A lot of urban novels have been written about the city in the name of love. Numerous Tbilisi sights are enshrined in poetic masterpieces: Mtatsminda or Narikala, Metekhi or Sioni, Baratashvili ascent or variegated baths, Ashpashkhana or Sheitanbazari …

Tbilisi is located in eastern Georgia, at an altitude of 400-600 meters above sea level. The capital is built on both banks of the river Mtkvari.

The climate is moderately warm and humid. January is the coldest month and July is the hottest. The average annual temperature is +13 degrees.

The population of the capital of Georgia reaches 1.5 million.

There are about 40 districts in Tbilisi, including the oldest – Abanotubani, Kala, Isani, Avlabari, Sololaki, Mtatsminda, Vere, Ortachala, Chugureti, Didube, Nadzaladevi. Each is interesting with its architectural monuments and history.

Tbilisi is a city where the line between legend and reality has disappeared.

What to see in Tbilisi:

The second Georgian city to make this list is Batumi- the seaport and strategic city of Georgia on the Black Sea coast.

Distance from Tbilisi, the capital of Georgia, Batumi, to the administrative center of the Autonomous Republic of Adjara is 375 km;

Here is the humid subtropical climate of the sea. The average annual temperature in January is 8-10 ° C, and in August it reaches +25 degrees.

The history of Batumi begins before our era. Greek philosopher Aristotle, BC In the 4th century, he referred to it as “Batus” in his writings. This was the first reference to the city, which has a long and interesting history.

Today, with its authenticity and diversity, the combination of the history of old Batumi and the sights of New Batumi, make it one of the most visited places in Georgia.

What to see in Batumi:

Kutaisi is one of the oldest cities in Georgia and Europe. The distance from Tbilisi to Kutaisi is 236 kilometers.

The present-day area of ​​the city was inhabited as far back as BC. In the thirteenth century – this is the era that reflects the myth of the Argonauts, which is suggested by archaeologists based on recent excavations.

B.C. From the III century there is a documentary material about the existence of Kutaisi, which can be read on the Internet and in textbooks.

The locals will tell you that Kutaisi is a city of people. Let’s visit Kutaisi together and ask the people …

What to see in Kutaisi:

Traveling to Georgia is unimaginable without visiting Mtskheta.

Mtskheta is the oldest capital city of Georgia. Magnificently citied at the confluence of the Mtkvari and Aragvi rivers,the establishment of Georgian statehood and the history of Christianity in Georgia began in Mtskheta. The greatest sanctuary of the Christian world is preserved in Mtskheta – the robe of the Lord.

This ancient city has always been famous for its architectural monuments and archeological finds. Mtskheta Monuments – Mtskheta Cross, Svetitskhoveli and Samtavro were included in the UNESCO World Heritage List in 1994.

The historical city of Mtskheta is located only 20 km away from Tbilisi, so Mtskheta is one of the centers of tourism and the most popular place for tourists visiting Tbilisi.

What to see in Mtskheta:

Sighnaghi is one of the most captivating cities of Kakheti and Georgia.

Tbilisi-Sighnaghi distance is 112 kilometers. It will take you about 120 minutes to travel by car.

When the Kakheti railway line is restored, you will also be able to travel from Tbilisi by train to the Tsnoristskali railway station – from here Sighnaghi is 13 km away, there is a walking distance.

The climate here is determined by the location of Sighnaghi – summer in Sighnaghi is hot (max. Temperature + 40 °) and winter is cold (minimum temperature -24 °);

This beautiful city,built on the ridge of Gombori, is the heart of Kiziki, and Kiziki, all Kakhetians will tell you, was a domineering country and only obeyed the king. They also add that Sighnaghi was a word of Turkish origin and means “invincible”.

The population of this area, it turns out, still lived before our era. Sighnaghi became a city in the 18th century, during the reign of Erekle II.

This “domination” seems to be seen in the character of the city. It is said that the monuments of Sighnaghi, every island of Lama and the fence of Sighnaghi preserve countless history or legend. There was a caravan route here, on which different cultures moved, and all to some extent left their mark.

Today, Sighnaghi, with its centuries-old adventures and architecture, can be said to be a city-museum.

Emotionally busy days are waiting for you here.

What to see in Sighnaghi:

PrevPreviousTravel to Georgia – Tour Recommendations
Menu
GET IN TOUCH

Menu
GET IN TOUCH

We'd love to hear from you

Send us a message and we'll respond shortly